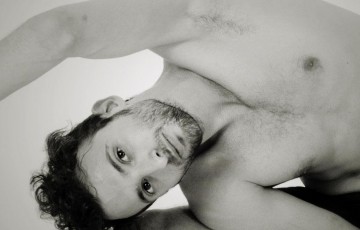 Hernan began his dance training at age 9 studying Argentinian folklore.  He continued his studies in circus skills and performance.  From the Age of 18 Hernan trained in the dance program at ART XXI in Buenos Aires and then at 21 he enrolled at the National Institute of Arts.  During his training Hernan studied with Ana Garat, Chichi Diaz, Edgardo Mercado, Emanuel Luduena, Eugenia Estevez, Liliana Cepeda, Roberto Galvan, Miguel Robles, Fabiana Caprioti, and Lucas Condro among others.

In 2009 Hernan traveled to Montreal Canada, where he was invited to dance with EZ Dance company.  Upon his return to Buenos Aires in 2010, Hernan continued to train and dance with the National Contemporary Dance Company in Buenos Aires.

In 2010 Hernan founded the dance company Andante in co-production with the cultural center Buenosayres Adan. In 2012 Andante performed in the UNTREF Festival in Rosario, Argentina.

Hernan has performed in projects under the direction of Cecilia Levantesi, Exequiel Barreras, Daniel Payeros and Saeed Pezeshki.

Hernan was hired as dancer researcher, and coordinator by Chery Matus and the Street Dance group. He worked in the research group as a performer and choreographer, coordinated by Valeria Martinez and Lucas Canepa,  Togther they created ASSEMBLY 1 a work (2013) presented at the Trilse theatre and fur coat (2014) presented at the Sabato Cultural Center, and DANZAFUERA in 2014.  He worked as a performer in the play "Revolving Doors" of Alora and Calzadilla in the framework of the exhibition "Infinite Experience" MALBA Museum.  Hernan also worked on the project COMMUNITY directed by choreographer Nicolas Rosses, which was premiered at the International Theatre Festival BUENOS AIRES (FIBA 2015).

He taught in the Odyssey Theatre School. He joined the faculty for "Cultural Experience" teaching improvisation classes at the University of Ezeiza. He also taught pedagogy at the Bernasconi Institute in Buenos Aires.

Today Hernan teaches physical training and contemporary dance since 2013 at the National University of Avellaneda, and continues his training as an actor with the director and playwright Ciro Zorzoli